I’m a meat-eater.  I’m pretty clear on that.  I eat all manner of meat – from the healthy meat at the health food supermarket where I work to grungy fast-food meat.  I have seen no likelihood of me making any major changes in my eating habits.  So why, when my lovely friend Cam invited me to come to her wonderful tavern/community meeting place THE BLOCK off biltmore http://theblockoffbiltmore.com/ to see a movie about veganism, did I get scared to see it?  I did get scared – I thought this might mess with me, might turn me upside down. 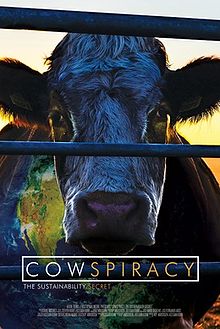 Cam is herself the best ad for veganism.  To know her is to like her – a lot.  She has such integrity and so much passion for the issue that it’s hard to hear her talk about it, even a little bit, without getting interested in it.  I want to be like she is.

I myself have a growing passion for the environment, for mother earth.  I was one of many people powerfully influenced by Al Gore’s An Inconvenient Truth: I came away from that movie greatly concerned for the vulnerability of our sweet planet earth.  The onslaught of anti-environment legislation pouring out of Donald Trump and the Republican congress has me very, very concerned.  I have been working diligently to help organize this week’s Asheville People’s Climate Rally – and have some hopefulness that our 200+ marches nationwide will get a good turn-out and will make a difference, including to fire up the modern environmental movement.  I picture myself getting arrested over this issue.  It’s not that I want to – I just think we may reach a point where totally legal actions no longer do the job.  Rev. Barber says we have already reached that point – and I trust him.

I didn’t expect this movie to pack a punch around the environment.  I should have expected this, because when I asked Cam if the movie was going to be about the environment, she said “Big time.”  I still didn’t get it.  Wow, is this movie ever about the environment, especially air and water pollution.  I could see myself become vegan just to be a good, responsible environmentalist.  But there’s lots more reasons.  I feel like I’m in the process of becoming a vegan – not there yet, but starting to make the change.